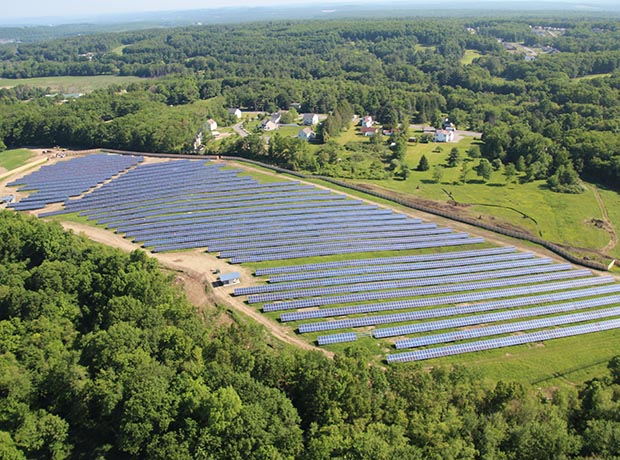 Sterling Solar, located in the Town of Sterling, Massachusetts, with a total capacity of 2.5 Megawatts (AC).

The total generation of the projects is purchased by Sterling Municipal Light Department (SMLD) through a long-term power purchase agreement. SMLD hand-picked Community Energy out of 30 potential candidates to develop the projects for the town. Development of the Sterling Solar projects was heavily influenced by the town and its residents as CES sought their input on how to best integrate the project into the community. Consequently, a custom landscaping buffer was designed and implemented on the perimeter of the solar array, which complements the rural surroundings of the facility.

In cooperation with the Town of Sterling and SMLD, a solar energy based educational initiative was developed featuring components like an informational display that includes real-time energy production data for the solar array. This display is located at the landowner’s nearby business, David Farmland, a popular family destination.

The ground-mounted installations were developed by Community Energy Solar and constructed by groSolar. The array area covers approximately 15 acres and will supply enough energy to power about 400 homes annually.

Sterling Solar has been online since January 2013.

Berkley East Solar, located in the Town of Berkley, Massachusetts, is a 2.5 Megawatt (AC) photovoltaic solar project. The total generation of the project is purchased by the Taunton Municipal Lighting Plant (TMLP) through a long term power purchase agreement. TMLP, the state’s largest municipal utility, will pass along the economic benefits of purchasing competitively priced solar energy to its 36,000 customers. The project also provides annual revenue to the Town of Berkley through a payment in lieu of taxes (PILOT) agreement and to landowners through lease payments; all without any additional burden to the local infrastructure.

Community Energy Solar worked closely with the Massachusetts Division of Fisheries and Wildlife to develop and install special habitat and protections for the Eastern Box Turtle, a Species of Special Concern under the Massachusetts Natural Heritage and Endangered Species Program. The turtle habitat is planted with a conservation grass seed mix native to New England and includes special nesting areas to promote reproduction.

Berkley East Solar has been online since September 2012. 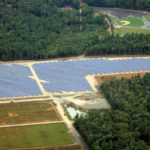 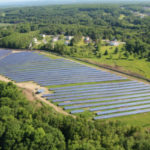 The Clarkson Solar project is hosted on land owned by Clarkson University, which also purchases the power through a long-term PPA.

The Gateway Solar project was developed by Community Energy and acquired by Constellation, an Exelon company, for construction and operation.

Keystone Solar is one of the first and largest customer driven utility-scale solar projects in PA.

The Lafayette Solar Gardens are located in Lafayette, Colorado. These projects were the result of a cooperative effort between Community Energy and the City of Lafayette.

Lake County Solar is located on an industrial site in Northern Indiana and supplies NIPSCO.

The Marion County Solar project is located on an industrial site in Indianapolis and supplies power to Citizens Energy Group and Indiana Power & Light.

The highlighted West Pemberton Solar and Jacobstown Solar projects are a total size of 28 MW (AC) located in Burlington and Warren County, NJ.

The Comanche Solar project was selected by Xcel Energy through a competitive bid process to supply the majority of its solar generation portfolio in Colorado.