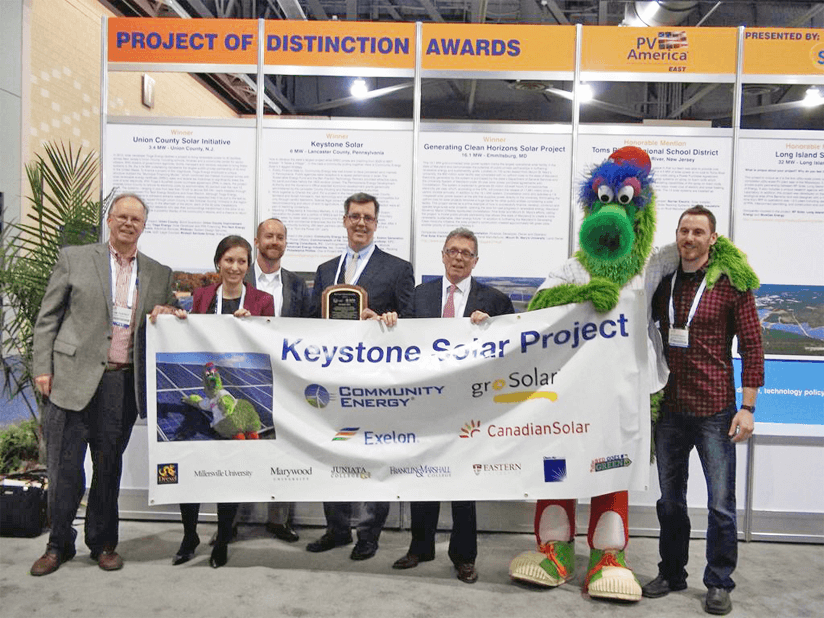 Located on 100 acres leased from Mount St. Mary’s University, this 16.1 megawatt (MW) grid-connected solar power system is one of the largest operational solar facilities in Maryland. The $50 million solar facility was completed with no upfront costs to the state of Maryland, and it demonstrates the potential of public-private partnership to advance renewable energy. This project serves as a prime example of how to successfully finance, develop, construct and operate large-scale solar projects. Constellation, an Exelon company, was the financer, developer, owner and operator; First Solar Electric was the EPC contractor and panel manufacturer; and Mount St. Mary’s University owns the land being leased to Constellation.

The solar project received financing and funding from the Sustainable Energy Fund and the State of Pennsylvania. The project has 6 megawatts DC capacity and provides approximately 8,000 megawatt hours (MWhs) of clean, fuel-free electricity per year, enough to power over 950 homes.

In 2012, solar developer Tioga Energy undertook a project to bring renewable power to 30 facilities across New Jersey’s Union County, including schools, libraries, and a community center for senior citizens. The 3.34 MW of solar installations represent the largest public-private partnership of its kind in the U.S. Dozens of government agencies, facility managers and vendors were needed to bring these systems to life. To finance the project, Tioga Energy employed a unique structure dubbed the “Municipal Financing Model,” which combined low-interest municipal bonds with state utility and federal tax incentives to significantly lower the cost of solar electricity. With Tioga’s SurePath Solar power purchase agreement (PPA) in place, Union County will receive guaranteed energy savings over the next 15 years, paying rates for electricity that are approximately 50 percent less than those of the local utility. The systems—ranging in size from less than 10 kW to almost 500 kW—were installed through a joint venture between Pro-Tech Energy Solutions and Huen Electric with environmental and engineering management firm Whitman providing design services.

The honorable mention winners are:

PV America East is presented by the Solar Energy Industries Association (SEIA)® and Solar Electric Power Association (SEPA)®, whose combined efforts have created a world-class, regionally focused and vertically integrated event for installers, designers and suppliers of photovoltaic (PV) technology and services. Unlike other PV conferences, all proceeds support the expansion of the U.S. solar energy market through SEIA’s and SEPA’s year-round research and education activities, as well as SEIA’s® advocacy efforts.

Established in 1974, the Solar Energy Industries Association is the national trade association of the U.S. solar energy industry. Through advocacy and education, SEIA and its 1,000 member companies are building a strong solar industry to power America. As the voice of the industry, SEIA works to make solar a mainstream and significant energy source by expanding markets, removing market barriers, strengthening the industry and educating the public on the benefits of solar energy. http://www.seia.org