Why are solar power a good idea for homes in Hartford, CT? The main reason is the rise of affordable solar panels, which have come down in price so much in recent years (thanks in part to government support) that they are now a good investment even in the less sunny climes of New England, including Hartford. On top of this, zero-down solar panel leasing programs have made solar power systems accessible to a greater number of households and businesses than ever before. This article takes a look at the benefits that solar panels could offer Hartford residents who opt to have them installed. 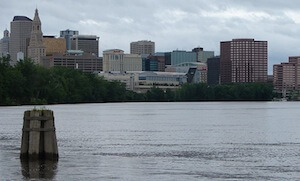 In the case of grid-connected solar systems, homeowners in Hartford (and anywhere else solar is popular) tend to choose to go solar for 2 reasons. The first and arguably most important of these is that solar panels save people money on their power bills. The other motivation is environmental impact; those who install a system usually do so with the intention of reducing their carbon/environmental footprint. Fortunately, it has come to the point where there is no financial trade-off between doing the right thing for the environment and saving money; in fact, these two goals can be complementary.

The global solar power boom of the last 5 years or so–which is only expected to speed up–has come about thanks to a convergence of economic factors. First, as mentioned above, there is the rapidly falling cost of solar photovoltaic (PV) and associated technologies. But on the other side of the equation is the international push to ‘de-carbonize’ electricity, which has birthed a whole slew of global, national, state, and local incentives for renewable energy. In Connecticut, for example, homes and businesses that opt to go solar could be eligible for a range of tax credits, grants, and special financing.

Your own personal power plant

Having a solar system is like having a personal rooftop power plant whose power output is predictable, as is the price of the power it produces. The less the initial cost of the installation, the less the per-unit cost of power from the system works out to be over the course of its operational life (25+ years). Right now, in Hartford, with incentives, solar installations are inexpensive enough to provide electricity at prices lower that than what people ordinarily purchase from the electrical grid.

Thanks to this fact, solar power is now a better investment than it has ever been, and on the back of this investment-worthiness has come the development of solar panel leasing programs, which have further driven uptake of solar across the country. Solar leasing programs, in which a 3rd party finances and owns the system on the roof of a building and sells the power to the occupants, make it possible for households and businesses to have a system installed with no capital expenditure. Instead, they pay for the solar power generated, which is sold to them at a rate lower than what utilities charge.

Do your part to clean up CT’s electricity supply: Go solar

As noted above, the other reason to consider going solar is the environment–the more solar power you consume, the less electricity needs to be generated far away from your home at centralized power plants. Connecticut’s energy supply may not be as carbon-intensive as many other states (such as Pennsylvania), but the mix cannot honestly be described as ‘clean’. The state is highly dependent on electricity generated from gas-fired power plants, whose fuel is frequently shale gas. Shale gas, as we’ve mentioned previously, may not be as CO2 emissions-heavy as coal when burned, but it nevertheless contributes to climate change, not to mention the other environmental issues associated with the ‘fracking’ method utilized to extract it from the ground. (Read more about clean energy in Connecticut.)

Solar options in Hartford: To lease or purchase?

Hartford residents considering going solar have the option to either purchase a system outright (or on financing) or alternatively to enter into a contract for a solar lease. A solar lease (called a power purchase agreement in some places) promises a number of potential advantages: No money down on installation, set electricity rates for 20+ years, no need to worry about components failing (all are under warranty for the duration of the contract), and savings on electricity bills compared to a no-solar scenario (see image to the right).

Thanks to generous tax credits through the federal government and a rebate from the state of Connecticut, purchasing a solar panel system in Hartford has never been more affordable. For those who have the capital to invest in purchasing a system, substantial power bill savings and attractive returns on investment await you. System payback periods can be as low as 5-7 years (with system lifespans as long as 25-30 years), after which point all of the electricity that the system produces is essentially free, as no fuel besides the sun is required.

Find out if solar is the right option for you

Interested in going solar in Hartford? Community Energy can help. Visit our Residential Solar Power page to start the process of determining if solar panels will work for you! You can also to talk with one of our Solar Consultants directly at 1-484-654-2470.