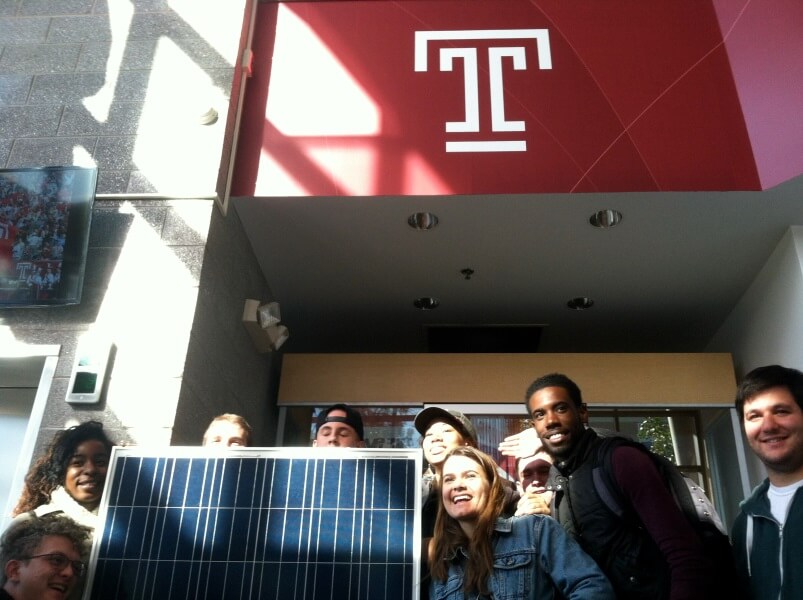 Temple students celebrate sustainability on campus with a solar panel from the project inside Edberg-Olson Hall.

Last year Community Energy built the largest solar project in Pennsylvania with support of commercial customers like the Philadelphia Phillies and area universities.

Community Energy Solar at Temple University is being installed on the roof of Temple’s Edberg-Olson Hall, the home of Temple’s football program.  “If you go down to Lincoln Financial Field, where Temple plays its football games, you will see both solar and wind power generation aiding in the stadium’s power usage,” said Temple Senior Vice President James P. Creedon.  “With this solar project in partnership with Community Energy, we now have something similar at the on-campus facility where our team practices for those games.”

Tens of thousands of SEPTA commuters will see the Community Energy Solar project at Temple University from the trains as they pass Edberg-Olson Hall on their way out of Center City Philadelphia.  On the south facing roof of the Temple athletic facility, the approximately 4,500-square-foot solar array will consist of 268 solar modules producing 63-kilowatts of photovoltaic (solar) power.

Community Energy has led renewable energy in the eastern U.S. for more than a decade, developing some of the first wind generation and moving into solar development at scale as technology improved. Solar projects are now under development in Pennsylvania, New Jersey, New York, Massachusetts, Indiana, Maryland, Virginia and North Carolina as well as Colorado and Arizona. CEI continues to lead the industry developing utility-scale solar generation with innovative retail renewable energy marketing.  High profile projects built by CEI include the 6 megawatt project in Lancaster County, Pennsylvania, the 7.8 megawatt Vineland Solar Project in the City of Vineland, NJ, the 24 megawatt Bear Creek Wind Farm in the Poconos, PA, and the 7.5 megawatt Jersey Atlantic Wind Farm in Atlantic City, NJ.  For more information visit