Colorado’s most powerful climate tool isn’t what you think

Electric vehicles can reduce the state’s emissions more than anything else. 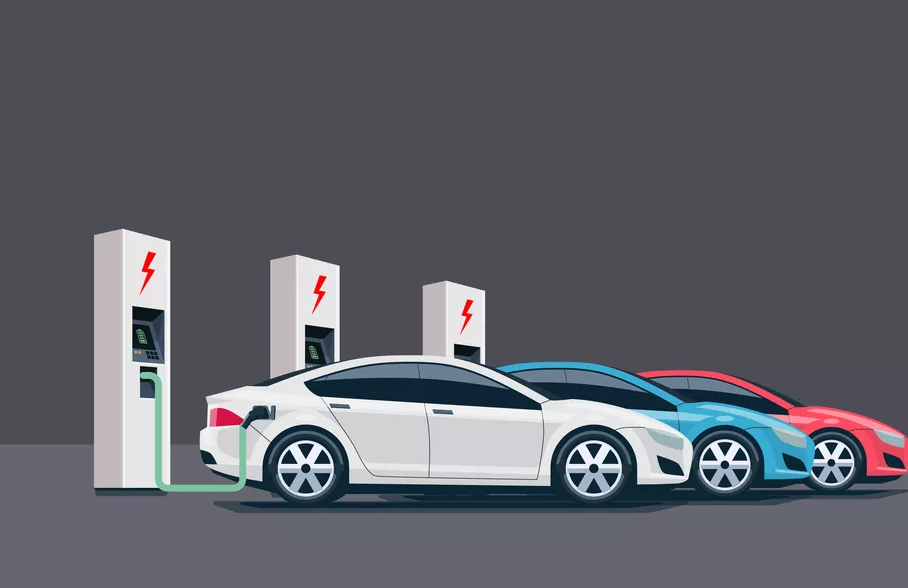 The Colorado legislature has had an extraordinarily productive year so far, passing a stunning array of climate and clean energy bills covering everything from clean electricity to utilities, energy efficiency, and a just transition. The list is really pretty amazing.

Among other things, the state adopted ambitious carbon targets: From 2005 levels, greenhouse gases must fall 26 percent by 2025, 50 percent by 2030, and 90 percent by 2050. Several of the bills passed in support of that effort focused on electric vehicles, extending available tax credits and funding charging infrastructure.

It got me thinking: Just how big a role are EVs going to play in decarbonization? How should policymakers be prioritizing them relative to, say, renewable energy? Obviously, every state and country is going to need to do both eventually — fully electrify transportation and fully decarbonize electricity — but it would still be helpful to better understand their relative impacts.

Nerds to the rescue!

A new bit of research commissioned by Community Energy (a renewable energy project developer) casts light on this question. It models the carbon and financial impacts of large-scale vehicle electrification in Colorado and comes to two main conclusions.

First, electrifying vehicles would reduce carbon more than completely decarbonizing the state electricity sector, pushing state emissions down 42 percent from 2018 levels by 2040 — not enough to hit the targets on its own, but a huge chunk. Second, electrifying vehicles saves consumers money by reducing the cost of transportation almost $600 a year on average.

Rapid electrification is a win-win for Colorado, a driver of decarbonization and a transfer of wealth from oil companies to consumers — but only if charging is managed intelligently, the new study argues. Let’s look at the details.

Comparing three scenarios for Colorado: business as usual, clean, and clean plus EVs

The study was done by Vibrant Clean Energy, a company led by Christopher Clack, who has been working on energy optimization models for many years.

For energy modeling enthusiasts (hi), probably the coolest thing about this little bit of research is the tool Vibrant has built to do it, the WIS:dom (ahem, Weather-Informed energy Systems: for design, operations, and markets) optimization tool. You can read about the details here, but suffice to say it allows accurate, high-resolution energy modeling at any scale. Vibrant is working on a full-decarbonization study for Colorado; this bit of modeling is an amuse-bouche, if you will. 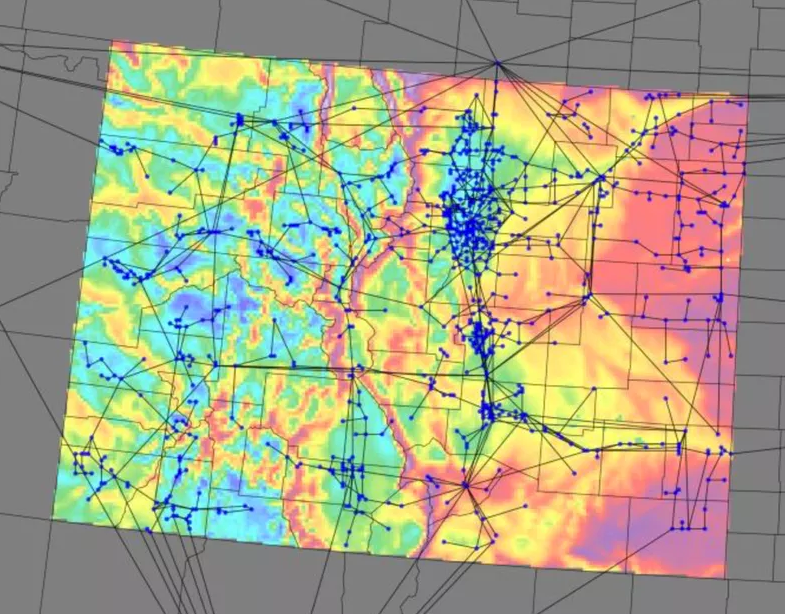 The WIS:dom representation of all transmission capacity in Colorado, with the background shaded according to wind capacity. VCE

The first is a business-as-usual (BAU) scenario, with projections taken from a state government report.

The second is the “cleaner grid” scenario, in which Colorado’s remaining coal plants are pushed to retire on an accelerated schedule. (This is based on a previous Vibrant study.) Everything else — storage, transmission, demand-side programs, and EVs — is left to the model to optimize, i.e., to find the cheapest path.

The third is the “EV grid” scenario, which takes the cleaner-grid scenario and adds vehicle electrification. Specifically, it pushes EVs to 100 percent of light-duty vehicles, and 80 percent of medium- and heavy-duty vehicles, by 2050. Beyond the coal plant retirements, it otherwise leaves the electricity sector to model economization.

Adding all those EVs to the grid has two main impacts: It increases demand for electricity, and it shifts the profile of when electricity is consumed. This latter part is crucial. EVs will only benefit the grid if their collective charging is properly timed and managed. The model was allowed to do that in this study, but doing it in the real world will require the intelligent participation of utilities.

In the cleaner-grid scenario, as the shuttered coal plants are replaced with a mix of wind, solar, and natural gas, emissions are reduced 55 percent in the electricity sector. They fall 16 percent in the state overall.

In the EV-grid scenario, electricity sector emissions fall 46 percent — the number is lower because about a third of the additional electricity demand from EVs is satisfied by natural gas — but overall state emissions drop 42 percent, more than two and a half times as much, representing 37 million metric tons of carbon dioxide. That’s thanks to an 80 percent drop in transportation emissions.

As I said, that in itself is not enough to meet the state’s emissions target. The state will have to force some additional cleaning of the electricity sector (and deal with other sectors) to do that, as this year’s package of legislation reflects. (I asked Clack if Vibrant ran a scenario without any new natural gas. Yes, he said. “It was $1 billion per year more expensive [around 1¢/kWh, or 15.9 percent more] and decreased emissions by an additional 14.8 metric tons per year.”)

But the drop in transportation emissions in the EV-grid scenario is sufficient to reduce more overall emissions than the entire Colorado electricity sector produces. EVs are a vital piece of the decarbonization puzzle.

The effect of all the new EVs on electricity generation is pretty simple: There will be more of it. 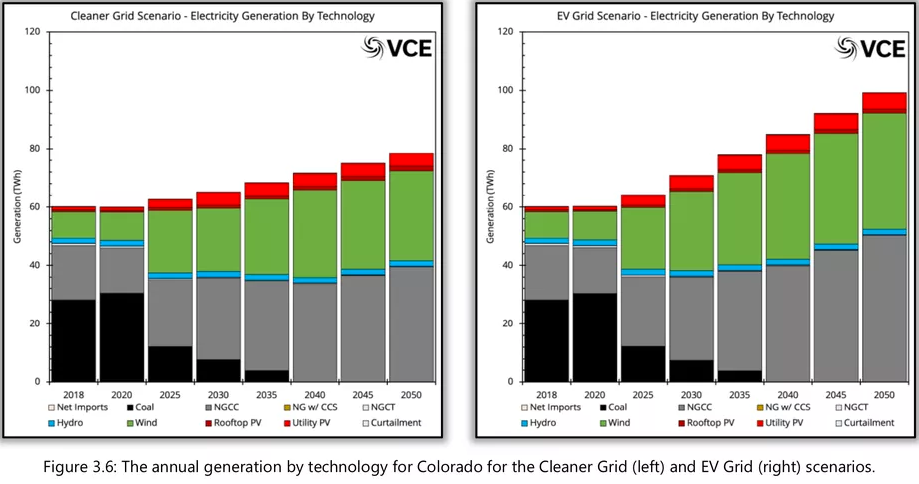 As you can see, in the cleaner-grid scenario, lost coal generation is replaced by a mix of natural gas, wind, and solar. In the EV-grid scenario, it’s roughly the same mix, just a little more of each — the addition of EVs raises total electricity demand by about 20 percent.

Particularly fascinating is the effect that new electricity mix will have on the dispatch of electricity on Colorado’s grid throughout the day. Here’s a graph of electricity dispatch for April 2018 and then the same month in 2040, after coal is phased out.

Two big differences worth noting: First, that big black stripe of coal is gone (hooray!), and second, dispatch becomes much more volatile, with wind and solar providing almost 100 percent of energy at some points and natural gas almost 100 percent at others.

And now, here are the fun parts.

Shifting from internal combustion engine vehicles (ICEV) to EVs would save Colorado consumers a whole boatload of money, for the simple reason that electricity is a cheaper fuel than gasoline. Here are the average savings for a Coloradan that switches from ICEV to EV between 2018 and 2040. 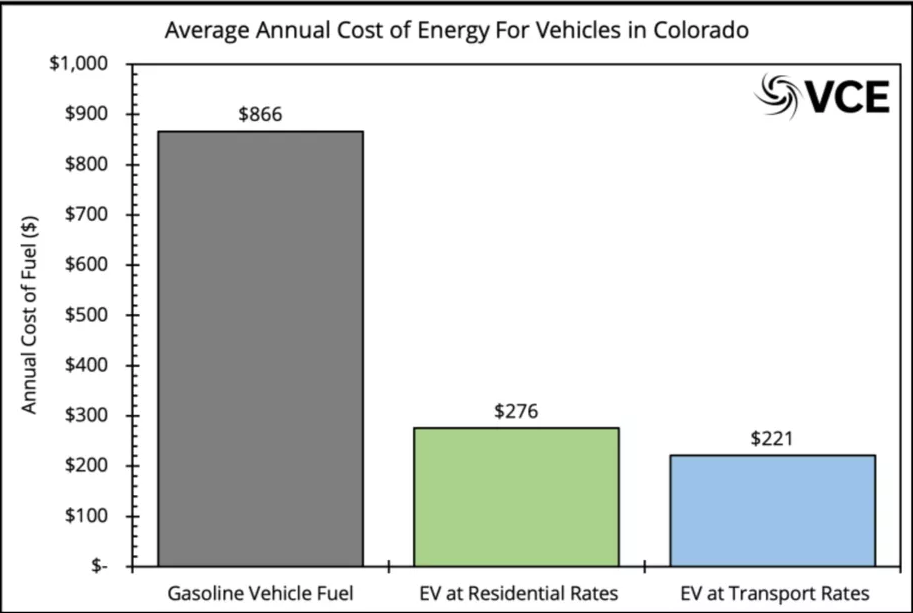 (Utilities sometimes offer a special rate for EV charging; that’s the bar on the right.)

You might think, with all the new EV demand added to the grid, electricity rates would go up. In fact, relative to the cleaner-grid scenario, the EV-grid scenario has an extremely small impact on rates (0.7 percent difference at the extreme). 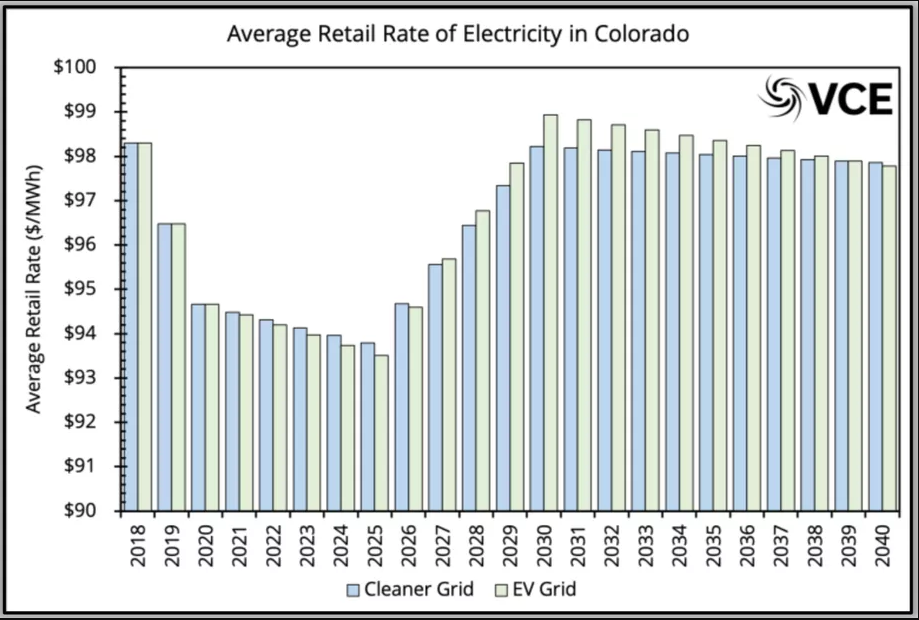 (That spike in 2025 is when the state tax credits for wind and solar expire; if they are extended, cost reductions would continue on the same trajectory.)

What this shows is that even Coloradans who do not switch to EVs would not be penalized by paying higher rates to cover those who do.

EVs are a climate triple threat

What this modeling makes clear is that when it comes to clean energy policy, EVs are a triple threat for Colorado (and, obviously, for other states, though the impacts will vary with weather and electricity mix).

For the electricity sector, as long as their charging is properly managed, EVs can provide much-needed new tools to help manage the influx of renewable energy.

And for consumers, EVs save money, not only because the fuel is cheaper (and getting cheaper all the time) but because EVs are much simpler machines, with fewer moving parts and much lower maintenance costs.

Especially in states with electricity sector emissions that are already low or falling, transportation is the next big place to look for emission reductions, and EVs are one of the few options that can reduce emissions at the necessary scale and speed. Colorado is right to encourage them.